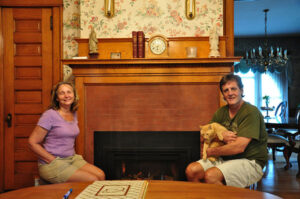 Dale and Sheila are both registered nurses. After 30 years of service, Dale retired from the USAF in 2004 and worked in the Cleveland Clinic system as a Director of Behavioral Health. Sheila continues to work as a nurse. Our veterans are honored daily and we offer a 10% veteran discount to all veterans at time of payment. We purchased our home in 2003 with forethought of making it a Bed and Breakfast. We love our community and want to be part of the tourism industry. The Salt water heated pool and the dry sauna are amenities for all guests. We look forward to meeting people from all over the USA and the world.

STATELY RESIDENCE of Mr. and Mrs. Dale L. Griffis, 884 Main St., is described in a history of Ashtabula County as “one of the more attractive homes in Ashtabula County.” The home was built in 1896 and 97 by John D. Cummins, an owner and operator of the Cummins Canning Co

Not one of the older homes in the city, but well known for its magnificence and elegance is the late Keith C. Stevens residence, 884 Main St.

Built by John D. Cummins over the two year period of 1896-97, it passed to a daughter, Mrs. Mabel Haskell, upon his death. Mr. Stevens purchased the home from her in 1943.

Mr. Cummins was engaged in the Cummins Canning Co. with his father, David Cummins, until the death of the elder Cummins in 1920. At this time, he took over the business.

John Cummins was owner of much land in the city as well as large tracts of farm land throughout Ohio. One tract here extended from Main St. in front of the present home south to Conneaut Creek and comprised about 70 acres. Gas from wells on this tract is still piped into the home for use. The 10-room home now stands on a 2.95 acre tract.

Granite Stone used in trim above windows and doors was hand cut in a building which stood in the maple trees to the west of the home over a two-year period before construction began.

Mortar was made from sand dug in the back yard. A pit still remains at the spot where sand was dug. It is said that Mr. Cummins purchased a railroad car load of nails and brass screws to use in the home’s construction.

The home consists of two master suites, a nursery, and two more large bedrooms, all bedrooms have full bathrooms, two living rooms, a formal dining room, a kitchen with floor to ceiling pantry and a large upstairs hall.

The third floor is a 33X66 foot finished ballroom with outside balcony access.

In the attic is a 2,600 gallon open-top copper cistern which was the original running water system. Water was collected from the roof in the tank and piped by gravity flow throughout the home.

A circulating hot water system puts hot water in either bathroom or the kitchen merely at the turn of a spigot. Coils through which the hot water circulates in each bathroom give additional warmth. Original plumbing was lead but has been changed to copper.

A dumb-waiter runs from the pantry to the fruit cellar. Disappearing sliding screen and glass doors open into the vestibule.

Near the peak of the roof is a 40-foot flag pole built into the structure. It can be operated through a small circular window near the peak on the east side of the home by a rope and pulley system.

Several gas fireplaces are situated throughout the home. At one time, combination gas and electric light fixtures were used in the home. The combination fixtures still remain in the ballroom chandeliers.

A protruding windowed section on the front – center represents a Capt.’s bow on a ore boat.

Mr. Griffis has rewired and updated plumbing in the entire home. The home now has two central heaters and air conditioning systems. A 20X60 foot pool house with bathrooms, dry sauna and honeymoon suite. The 22X40 foot in ground salt water pool is a refreshing get away from the hot summer’s heat.

Builder of the home, John Cummins, was reared and educated in Conneaut. He married Miss Mary Risdon in 1872. They had four children, Thomas, a civil engineer; Mabel, who married John Haskell; Margaret, who married Samuel T. Harris and Robert E., a successful Conneaut businessman.

Mr. Cummins was an organizer of the Conneaut Mutual Loan and Trust Co. and served as vice president of the Pennsylvania and Ohio Railway Co. for a number of years.